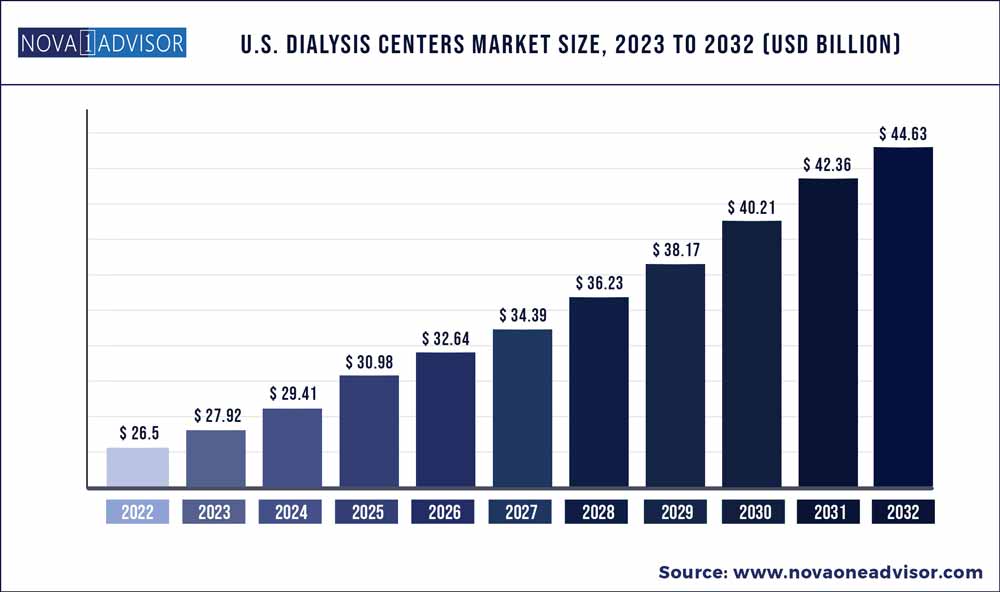 Major factors driving the growth of the market in the country are the high prevalence of renal diseases, technological advancements, favorable reimbursement, and the lack of kidney donors.

According to the national kidney foundation, 78,600 Americans have end-stage renal disease, wherein 71% of them are on dialysis while 29% had kidney transplants. As per the united health foundation, West Virginia had the highest prevalence of kidney disorders in the U S. 4.6% of the population in the state has been diagnosed with a kidney disorder, while 2.9% population in the U.S. have been diagnosed with the same, indicating the extremely high prevalence in the state.

According to the CDC, the prevalence of Chronic Kidney Disease (CKD) in the U.S. is higher in individuals aged above 65 years or older (38%) as compared to those in the age group of 45-64 years (12%) and 18-44 years (6%). As the U.S. has a significantly high geriatric population, due to increased life expectancy, the demand for the services is high in the country.

The high prevalence of End-Stage Renal Disease (ESRD) and favorable reimbursement are some of the key factors expected to boost growth. The expenditure on treatment is gradually rising due to the increasing prevalence of ESRD.

The patients need to travel to and fro the center for around 3 days per week, the proximity from the patient's residence is generally an important criterion for the center of choice. Hence the launch of new facilities is a key strategic initiative undertaken by major players to increase their market share. For instance, in May 2021, U.S. Renal Care, Inc. inaugurated three new facilities, one in-center facility and two focusing on home therapies. This expanded the company’s presence in the Southwest Florida region.

The COVID-19 pandemic resulted in patients facing difficulty in having an access to treatment for end-stage renal disorder, requiring multiple sessions within a month. According to the national kidney foundation, 15.8% of the patients undergoing treatment for end-stage renal disease had COVID-19 infection. The federal government & service providers promoted home treatment. In June 2021, a new campaign innovative kidney care was launched by nine leading healthcare organizations for patient options for receiving home treatment.