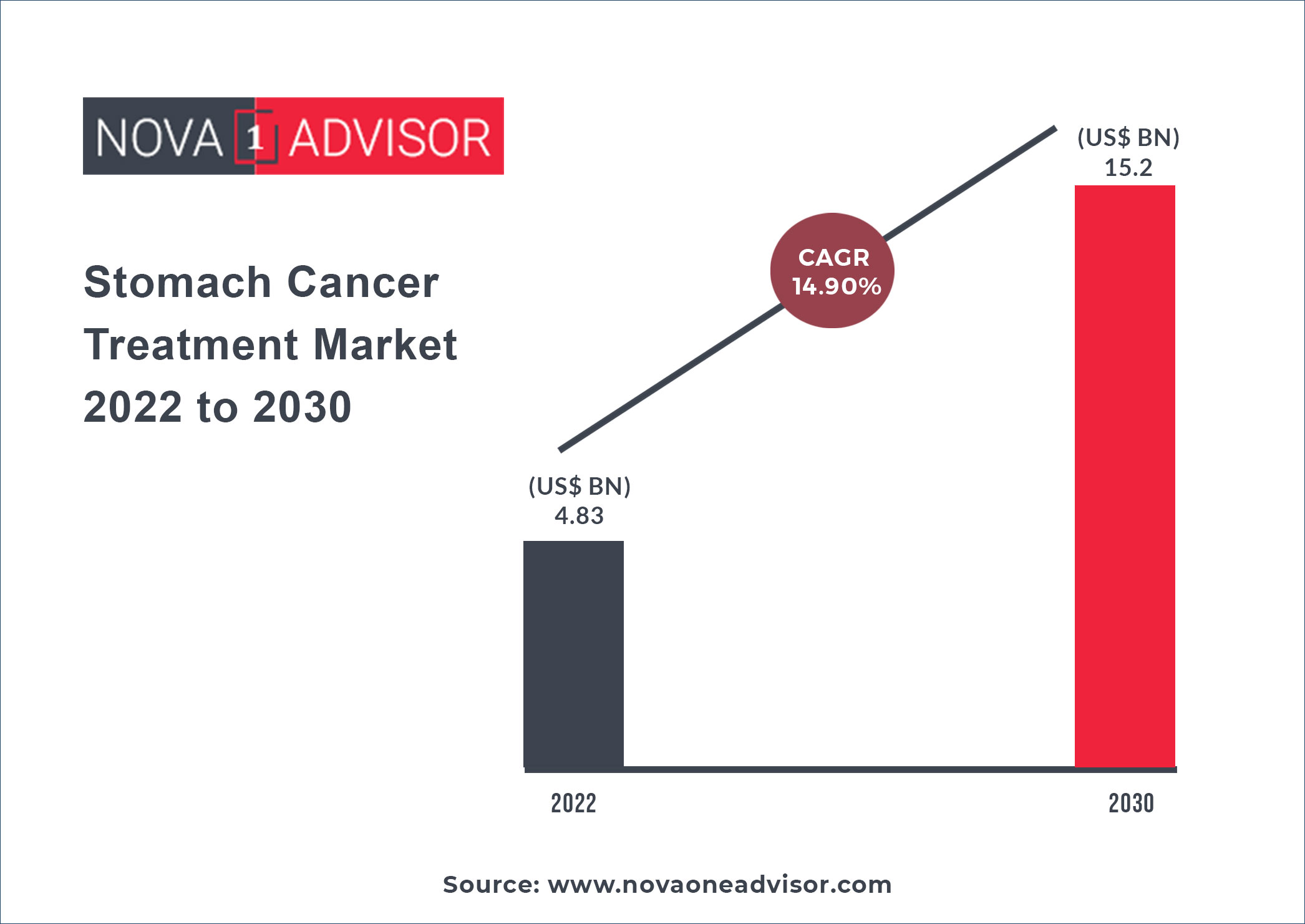 Increasing uptake of immunotherapy and targeted therapy, coupled with the launch of new drugs, is expected to fuel growth.

According to Globocan, the incidence of gastric cancer in 2020 was around 1.1 million, which is expected to increase to 1.42 million by 2030. Increasing knowledge regarding the molecular basis of the disease has led to a rise in the number of targeted drugs and immunotherapy drugs being developed and launched in the market. HER-2 targeted drugs such as Herceptin have been available in the market since 2010. Another targeted drug, Cyramza, which is a VEGF-targeting monoclonal antibody, has been available since 2014. EGFR and PD-1 targeted drugs and immunotherapies are currently being developed for the treatment of gastric cancer.

The approval and subsequent launch of drugs in the clinical pipeline are also expected to drive the gastric cancer therapy market. For instance, in March 2021, the NMPA approved Eli Lilly and Innovent Biologics’ drug Sintilimab, a PD-1 inhibitor, for the treatment of gastric or gastroesophageal junction adenocarcinoma in China. Furthermore, in May 2020, the U.S. FDA granted the orphan drug designation to Enhertu for the treatment of gastric cancers. Subsequently, in January 2021, the U.S. FDA approved Enhertu for the treatment of advanced or metastatic forms of the disease.

Patent expiry of key drugs such as Herceptin and subsequent launch of biosimilars are expected to restrain the growth of the gastric cancer therapy market. Additionally, lesser adoption of targeted therapy due to high costs might hamper the growth of the market. For instance, Cyramza was not considered cost-effective as compared to other drugs. It was rejected by NICE due to a lack of cost-effectiveness in England. Furthermore, the product was rejected for reimbursement in France due to a lack of additional benefits compared to the clinically relevant comparators.

The targeted therapy segment is expected to account for the largest share of the gastric cancer drugs market by the end of the forecast period, owing to product launches, recent advancements in the field of targeted therapy, and a robust clinical pipeline. On the other hand, the patent expiry of Herceptin is restraining the growth of this segment.

The immunotherapy segment is expected to witness the fastest growth during the forecast period due to increasing product launches. For instance, in March 2020, Bristol-Myers Squibb Company’s drug for Opdivo received approval for stomach cancer treatment in China. Another key immunotherapy drug approved is Keytruda. Immunotherapy in combination with chemotherapy is generally used as a third-line or fourth-line treatment option.

The injectable segment dominated the gastric cancer therapy market with a revenue share of over 91.0% in 2021. Most of the chemotherapy drugs, targeted drugs, and immunotherapy drugs are available in injectable form, leading to the dominance of this segment.

The oral segment is expected to expand at the highest rate during the forecast period. In order to overcome the cumbersome IV administration, many companies are developing oral chemotherapy agents for treatment. For instance, Ascelia Pharma is currently conducting Phase II clinical trials for the use of Oncoral (oral irinotecan) for the treatment of gastric cancer.

The PD-1/PD-L1 inhibitors segment is expected to expand at the fastest CAGR during the forecast period. The approval and increasing uptake of Keytruda and Opdivo for gastric cancer therapy are driving this segment. In addition to this, the NMPA approved TYVYT (sintilimab) for the treatment of gastric cancer in China in June 2021.

The specialty and retail pharmacies segment dominated the gastric cancer therapy market in 2021 with a revenue share of over 66.0%. Most of the drugs used for the treatment of gastric cancer are distributed via specialty pharmacies as they have to be stored and distributed under specific conditions. For instance, in June 2021, Blueprint Medicines recently selected PANTHERx Rare Pharmacy and Biologics, by McKesson, for the distribution of its GIST treatment drug AYVAKIT. Based on the distribution channel, the market has been segmented into hospital pharmacies, specialty and retail pharmacies, and others.

The hospital pharmacies segment accounted for the second-largest share in 2021. Most patients with gastric cancer undergo inpatient administration of treatment in developing nations. This is one of the major factors fueling the growth of this segment.

The GC/GEJC segment held the largest revenue share of over 86.0% in 2021. The high disease burden coupled with a large number of approved products for this indication is contributing to the growth of this segment. According to Globocan, the 5-year prevalence of stomach cancer was around 1.8 million in 2020. Based on disease indication, the market is segmented into gastric cancer/gastroesophageal junction cancer (GC/GEJC) and gastrointestinal stromal tumors.

The gastrointestinal stromal tumors (GISTs) segment is estimated to witness moderate growth during the forecast period. GISTs are rare cancers and around 4,000 to 6,000 new cases are diagnosed every year in the U.S. Targeted drugs such as Ayvakit, Gleevec, Stivarga, and Qinlock are used for the treatment of GISTs.

Asia Pacific dominated the gastric cancer therapy market in 2021 with a revenue share of over 56.0%. This is mainly due to the higher prevalence of gastric cancer in this region. For instance, in 2020, the number of new cases in Japan was around 138,000, and in China, it was around 479,000. In countries such as China, chemotherapy is still the most preferred treatment option; however, the presence of a strong product pipeline and the expected approval of the products will boost regional growth during the forecast period. For instance, in September 2021, AstraZeneca and Daiichi Sankyo Company dosed the first HER-2 positive gastric cancer patient in Phase II trials of Enhertuin China.

Europe is estimated to witness considerable growth during the forecast period due to increasing investments in the development of advanced treatment options and the rising target patient population. For instance, in October 2021, the European Commission approved Bristol Myers Squibb’s Opdivo for the treatment of gastrointestinal junction cancer.

Some of the prominent players in the Stomach Cancer Treatment Market include:

Segments Covered in the Report

This report forecasts revenue growth at global, regional, and country levels and provides an analysis of the latest industry trends in each of the sub-segments from 2017 to 2030. For this study, Nova one advisor, Inc. has segmented the global Stomach Cancer Treatment market